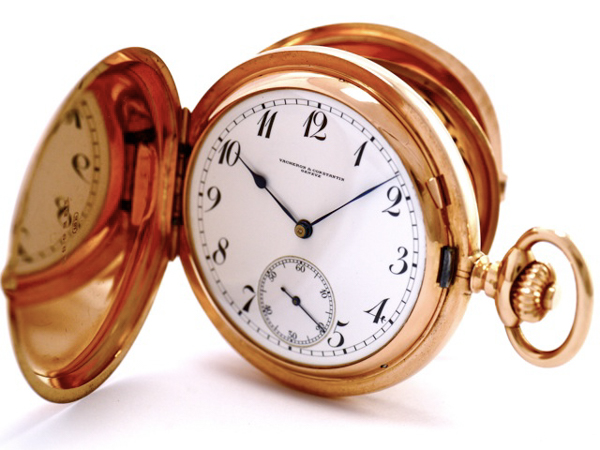 Founded in Geneva in 1755 by Jean-Marc Vacheron, the traditional luxury watch manufacturer Vacheron Constantin has its origins in the circles of the Geneva Cabinotiers. The "Cabinotiers" worked in the light-flooded "Cabinets" just below the rooftops of the Geneva district of Saint-Gervais and refined the blanks. Down to the present day, the "Atelier Cabinotiers" have produced watches to the highest standards. Vacheron Constantin is the world's oldest watch manufactory, which has been continuously producing since then.

From the beginning, Constantin Vacheron produced high-quality custom-made pocket watches for his customers, among them mostly nobles and kings like Louis XIV, Czar Alexander II and the Czarina, the Maharajah of Patiala and the New York banker Henry Graves Jr.

However, with the French Revolution in 1789, demand collapsed and the Geneva Manufacture had a great deal of effort to keep its business alive. François Constantin joined Vacheron's descendants and opened shops in Europe and the USA under the motto "Faire mieux si possible, ce qui est toujours possible". Since then, the company has been renamed Vacheron & Constantin.

In the mid-nineteenth century the demand for the high-quality timepieces of the luxury watch manufactory was so high that Geroges Auguste Leschot, the then technical director, developed a machine that enabled serial production. The manual work was supplemented by machine production, so that the production and marketing of the products could be accelerated.

In 1880, the Maltese cross was registered at the Swiss Federal Institute of Intellectual Property in Berne, as a logo by Vacheron Constantin.

After the death of Francois Constantin, the visionary George Grandjean took over the management of the company. In 1903, he was commissioned by the Wright brothers to build a portable watch, which can help control their motorized biplane named Wright Flyer. Vacheron Constantin designed a robust pilot's watch with chronometer manual winding movement for the flight pioneers.

From 1910, Vacheron Constantin began the production of pocket watches besides wristwatches, which were mostly equipped with LeCoultre ebauches. Between 1910 and 1930, the manufactory manufactures several clocks with great complications, such as the pocket watch with percussion: James Ward Packard (1918) or the Fuad I (1929), a highly complex pocket watch made out of 18 carat gold for the Egyptian King Fuad I with double chronograph calendar, gear reserve display, alarm, a minute-minute repeater as well as Grande and Petite Sonnerie.

King Faruq of Egypt received the "La Farouk" one of the two most complicated pocket watches of the 20th century at the age of 15 years. This masterpiece of watchmaking is equipped with an alarm clock and concentric reserve displays with indicators for weekday and month.

For the watch collector Count de Boisrouvray, a cousin of Prince Rainier III. of Monaco, the manufactory established the Boisrouvray in 1948. The pocket watch made out of 657 items and 14 complications was the third most complicated watch ever produced by Vacheron Constantin.

From 1938, Vacheron Constantin became a member of the Société Anonyme de Produits Industriels et Commerceaux group (S.A.P.I.C), like the Jaeger-LeCoultre watch factory. Various financiers changed over the next few years in the company's history.


In 1990 the Vendôme Group, today Richemont SA, took over the company. Under the leadership of Claude-Daniel Proelloch, timepieces of the highest watchmaking art have emerged, such as the Malte-Squelette Tourbillon with the typical barrel-shaped case, the Toledo, the Chronograph Les Hisotriques and the Overseas series.

The first Overseas was launched in 1977, 20 years later, the Geneva-based company presents a "new" version of the sports watch in the legendary 70s design. The Overseas Series is the sports line of Vacheron Constantin. The recognition sign of all Overseas models is the bezel with its rectangular recesses, which remind of the Maltese cross, the landmark of the brand. The Overseas automatic and the Overseas chronograph are the first to appear.

Since 2000, the term "Manufaktur" is written in upper case by Vacheron Constantin. The first work, the Malte Tourbillon was followed by the new hand-winding caliber 1400. The production of the Vacheron Constantin watches was relocated in 2004 in the new futuristic main company headquarters in the Geneva suburb of Plan-Les-Ouates .

To mark the occasion of the 250th anniversary of a continuous market presence, Vacheron Constantin launched the Tour de l'Île wristwatch with 16 complications and 834 items, one of the most complicated wrist watches ever. It costs about 1.9 million francs, which makes it one of the world's most famous wrist watches.

Special jewelry made by Vacheron Constantin are the watches of the series: Métiers d'Art. The characteristics of this series are sophisticated manufactory calibers and artistic design using unusual materials.

Today the Vacheron Constantin collection consists of the Patrimony and the Traditional series, which stand for simple elegant understatement watches. The Patrimony Traditional Tourbillon 14 Jours is the first watch of the luxury watch manufactory, which complies with the criteria of the Poinçon de Genève (Geneva Punch). Vacheron Constantin has a lot to do with observing the criteria of the Geneva seal, one of the most famous quality seals of watchmaking.

The micromechanical masterpiece consists of 2826 individual parts, weighs more than one kilogram and the white gold case has the dimension of a hamburger.