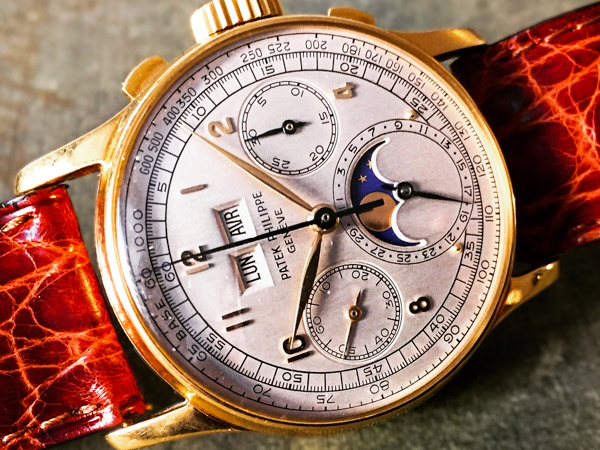 The timepieces of the Genevese manufactory Patek Philippe, count for many connoisseurs, for over 175 years, among the best in the world.

As the last independent Geneva manufactory in family ownership, Patek Philippe is still pursuing the visions of its founders, Antoine Norbert de Patek and Adrien Philippe. "The best and most beautiful watches in the world". The success of Patek Philippe is based on a sense of tradition, craftsmanship and technical innovations.

After the war, the Polish officer and nobleman Antoine Norbert Graf de Patek had to leave his homeland and apply for political asylum in Switzerland. Together with the Polish emigrant Franciszek Czapek, a watchmaker from Warsaw, he founded a watch manufactory. They produced pocket watches for Polish emigrants and patriots, however the cooperation between them was short-lived. In 1845 the French watchmaker Jean Adrien Philippe, met Patek in Paris. Shortly thereafter, Philippe joined the company and the watch business was renamed to Patek Philippe & Co. For both partners, absolute perfection was the goal. The successes of the Patek Philippe manufactory are still based on the following principles: the quality of the manufactured timepieces must always be at the highest possible level and, with the help of innovations and design solutions, put the competition out of action. The traditional house is still considered an innovation driver. Adrien Philippe was a pragmatic business man and a successful pioneer. He designed new machine tools and ensured that industrialization entered production. He presented the timepieces of the manufactory to a broad, solvent audience at numerous exhibitions in America and Russia. Queen Victoria of England belongs to the owner of a gold pocket watch with crown lift. But she did not remain the only one who could call a Patek Philippe timepiece, her own. Many kings and nobles of this time belonged to the clientele of the House of Patek Philippe. The first watch was made in 1868 for the Hungarian Countess Kocewicz.

The experts argue, but probably this was the first watch ever in the history of watchmaking. Even after the death of Antoine de Patek, the innovative power of Adrien Philippe did not detract. His creative highlight: In 1889, he designed a clockwork with an "Eternal Calendar" whose display did not have to be corrected manually - neither for the different months nor for leap years. After his death in 1894, his son-in-law Joseph-Antoine Benassy-Philippe took over the management of the company and converted it shortly after the turn of the century into a company called Ancienne Manufacture d'Horlogerie Patek Philippe & Cie. S.A. The Manufactory enjoyed already worldwide glory at the end of the 19th century and was one of the most important watch houses in the world.

Adrien Philippe was also a brilliant inventor and visionary. He designed the modern crown hoist for mechanical watches (1845), one of the most revolutionary inventions in watch history, which reached its final form in 1861. In 1845 the founding duo Antoine Graf de Patek and Jean-Adrien Philippe landed another coup, they invented the principle of minute repetition. Just two years later, Adrien Philippe presented the tension spring with a free end attached to a towing fence. This evolution was decisive for the later development of the automatic watch. Between 1845 and 1996 (year calendar), Patek Philippe had patented over 70 inventions, among them the double chronograph, the first wristwatch with perpetual calendar (1925) and the first wrist chronograph (1927).

From the Genevese manufactory are many of the most complicated pocket and wristwatches ever built.

In 1930, Patek Philippe presented the Calatrava, the classic watch in timeless design, which was to become the landmark of Patek Philippe. The name goes back to the oldest Spanish knightly order of the Calatrava, a covenant of Catholic knights, who saved the city of the same name and the monastery from Arab invaders, thus securing European independence. The lily cross of the Order of Calatrava is the trademark of the Patek Philippe watches, which is depicted on the winding crown and the case base.

The timepiece is often copied to this day, but remains unmatched not least because of the exquisite inner life. The design of the Calatrava is inspired by the simple forms of the Bauhaus, with elements such as the Clou de Paris decor or wide polished lunettes. The Calatrava series now includes a large number of exclusive chronometers, including the "Calatrava No.96".

The most expensive (ever auctioned) pocket watch in the world is that in 18-carat gold, - Patek Philippe "Henry Graves Supercomplication". The pocket watch was named after the principal - the New Yorker banker and one of the most important watch collectors of the 20th century - Henry Graves. 5 years alone, passed only with the planning of this special watch. Completed in 1933, the most complicated watch of all time was presented. The Supercomplication consists of 920 items and weighs nearly one pound, with 24 complications such as a perpetual calendar, a trailing celestial chronograph, a Grande Sonnerie, the display of lunar phases, sidereal time, and sunrise and sunset time. The Supercomplication surprises with further highlights - it plays the Westminster carillon at the push of a button and shows the night sky over the New Yorker Central Park, on the back of the case. Beginning with 1940 Patek Philippe starts with the serial production of chronographs and wristwatches with perpetual calendar. In the following years, the Manufacture, was winner of numerous Precision Competitions of the Geneva Observatory. Already in the year 1941 they launched the Reference 1518 - for the first time a chronograph with a perpetual calendar, which was produced as standard. This was followed by the References 2499, 3970 and most recently the 5970. Currently the Reference 5270 is the flagship of Patek Philippe.

In 1962, the world's first wristwatch with perpetual calendar and automatic winding was introduced. 1966 Jean Daniel Rubeli designed, the model Ellipse. The men's watch with the "divine proportions", its elliptical body, the rules of the golden section, a concept taken from the art. The Ellipse d'Or is one of the most popular watch models by Patek Philippe.

In 1976 the old-established, classy Genevese manufactory presented a watch model that reflects the spirit of the seventies. The design of the Nautilus with automatic movement and steel housing was taken over by the renowned designer Gérald Genta. He said, "at that time I introduced a new style, which was said to be gentle lines." The sports watch in the portholes design initially met with incomprehension. Meanwhile, the Nautilus is a design icon, which is available to both men and women.

In 1977, the research department of the Genevese Manufacture with the cCalibre 240, the flattest automatic movement with only 2.40 mm height, impressed its audience.

The Patek Philippe Ref. 3940 was built from 1985 to 2006, that is, twenty-one years, and set therefore a very long time the standard for the other perpetual calendars. The special feature - Patek Philippe dedicated a model of Ref. 3940 to their business partner Beyer. The honorary president of the Genevese manufactory, Philippe Stern, also carries the model with the golden dial. In 2006 the Ref. 3940 was replaced with the Ref. 5140.

On the occasion of the 150th anniversary of the manufactory, the legendary Calibre 89 was presented in 1989, after nine years of development. With 33 complications and 1728 components this watch is considered a pocket watch of superlatives. Minute repetition with large and small chime mechanism, as well as an alarm clock, a tourbillon, a perpetual calendar and a chronograph movement.

In 1997 the Patek Philippe Aquanaut appeared, based on the success model Nautilus. The Reference 5167 is equipped with the black dial, which is covered with lines reminiscent of a globe. The men series of the Aquanaut has a waterproofness of 120 m. The highlighted figures, which are equipped with illuminants, make the Aquanaut an ideal diving watch.

In 1999 the first diamond-studded steel watch was launched - the Twenty 4, followed by one of the three most complicated pocket watches in the world, the Star Caliber 2000 in the year 2000.

In 2002, the traditional company from Geneva presented the model Sky Moon Tourbillon Ref. 5002, one of the most expensive watches in the world (Platinum variant costs approx. 800,000 euros). It includes a tourbillon, a perpetual calendar with the display of moon age (number of days since the last full moon), leap year, weekday, month and date. This is also the first "Doubleface" watch of the Patek Philippe. The reverse side shows the stars chart of the northern hemisphere under a sapphire crystal. Each year, only two copies of the Sky Moon Tourbillon are produced due to the extreme production effort.

The men's watch in the Art Deco style, which is also the first mechanical movement equipped with a 10-day power reserve, was launched in 2003.

Exactly 70 years after the publication of the famous Reference 1518, Patek Philippe presented the Reference 5270G-001 at the "Basel World 2011". G, where G stands for gray or white gold, and -001 denotes the dial variant. While the earlier references still contained calibres of Lemania and Valjoux, the Reference 5270 sets completely on its own manufactory calibre. The chronograph calibre CH 29-535 PS Q, consists of 456 parts with a power reserve of 65 hours.

In the meantime, the Stern family manages, now in its fourth generation, one of the few independent watch companies to continue under the name of Patek Philippe. Currently, Thierry Stern is the watchmaker's CEO, in 2009 he succeeded his father Philippe Stern. The family company is the only manufactory whose complete production of mechanical movements has been awarded the Geneva Seal (Poinçon de Genève). Under the leadership of Charles and Jean Stern, the decision was taken to develop their own ebauches, which strengthened the independence of Patek Philippe. Until 1932 ticked in the watches of the house revamped ebauches by Victorin Piguet or Jaeger LeCoultre. In auctions of the big auction houses such as Christie's, Bonhams or Sotheby's, the classics of the traditional company, which can be seen on the famous Calatrava cross on the winding crown, regularly reach dizzying prices. The luxury watches from Patek Philippe are now purchased not only as consumer goods but also as value-driven money investments. Among the professed Patek Philippe bearers are the names of important personalities such as France's former President Nicolas Sarkozy, the billionaire George Soros, Eric Clapton and the music legend Sir Paul McCartney. The 20 most expensive wristwatches in the world ever sold at auctions were made exclusively by the manufacture Patek Philippe.