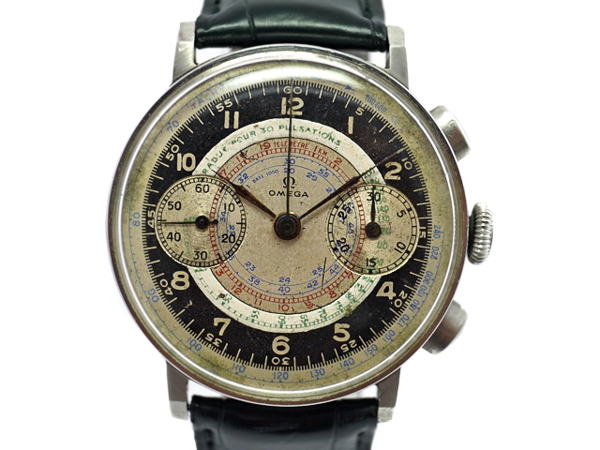 The 23-year-old Louis Brandt decided to open his own «Comptoir d'etablis- sage» in La Chaux-de-Fonds, Swiss in 1848. «Comptoir d'etablis- sage» stands for a factory in which raw materials and watch components are assembled by an "etablisseur" to a timepiece. At first, he personally traveled through Europe to supply customers. Later this task was taken over by his sons Louis and César and the company name was changed to Louis Brandt & Fils. The sons moved to Biel in 1880 with the handicraft company, since the connection to the traffic routes was better there and they could use the hydropower of the city free of charge. This was indispensable for mechanical production. Soon afterwards, the company owners decided to produce their own watches with their own mechanical movements. This plan went on, and as early as 1889, it was the largest watch factory in Switzerland.

Almost five decades ago the company carried the Brandt in the name, until 1894 when it was renamed in Omega. During this time, the repair company also developed into a manufactory. The new name - omega Ω, which can be found as the last letter in the Greek alphabet, is therefore a metaphor for "perfection". The precision of the Omega factories convinced the British Air Force and shortly afterwards also the American army, so that from 1917 Omega became the official watch in the First World War.

Omega, with its mechanical chronometers, stood 93 times on the victory stage in the accuracy competitions of the Swiss observatories Neuenburg and Geneva. At the Chronometer contest in Kew Teddington (England), Omega was able to reach 97.8 out of 100 possible points in the overall ranking of 1936. A result that has not been surpassed to this day.

The result of these successes is the Omega Constellation series, which has been ranked number one in the Chronometer tests for several years.

In 1930, Tissot and Omega joined the S.S.I.H. (Société Suisse pour l'Industrie Horlogère), the first Swiss watchmaker's association. Later, this was to develop into the Swatch Group.

In 1932 the Omega Marine watch came on the market. It was the first Swiss diving watch. The special thing about it, was that the pieces were inserted into each other. Omega placed the crown at 12 o'clock position, so that both housing parts could be pressed tightly together.

The first Olympics accompanied Omega already 1932 in Los Angeles. At that time, a single watchmaker packed up with 30 split-second chronographs showed up, to ensure timekeeping. At this first appearance as official timekeeper of the Olympic Games, Omega was able to measure the results down to the tenth of a second. Since then Omega has been 25 times the Official Timekeeper of the Olympic Games. The official timekeeper is not to be equated with a sponsor, which is a coveted job that you have to apply for.

Also in 2016, Omega participated in the Olympic Games in Rio. The equipment the Omega had for the exact time measurement in the luggage weighed about 450 tons.

In 1951 Omega presented the men's wristwatch Cosmic. The automatic caliber Omega 2601 achieves an impressive 72 hours of power reserve thanks to its twins barrels. The production is limited to 1951 individually numbered copies. A year later, the Constellation model is introduced to the market as an automatic chronometer and since then plays an important role in the brand's program. The Constellation was once the flagship of Omega and is very popular with the vintage watch collectors.

The astronaut Buzz Aldrin wore a robust chronograph on the wrist at the moon landing 1969, at that time, simply called Speedmaster Professional. The Omega Speedmaster had to withstand extensive test procedures (impact testing, acceleration, vibration and temperature fluctuations between -18 and +93 degrees Celsius, 16 times acceleration (g), pressure of 200 m water depth, antimagnetism, overpressure, noise) of NASA. The Omega Speedmaster Professional has been able to push through hundreds of other models during the NASA test and has become the official watch for all astronauts. The competitors came from famous houses such as Rolex and Longines. Omega applied with the Speedmaster model (ST105.003 of 1964), Rolex sent the so-called pre-Daytona model, the Cosmograph chronograph (Ref. 6238) with the Valjoux 72 movement. The "Original-Speedmaster", caliber 321 wore the reference number CK 2915, it existed since 1957. There are still discussions, whether it is exactly this model, which Aldrin carried on his wrist, when he entered together with Niels Armstrong the moon. Today, sinfully expensive collector watches. Meanwhile the chronograph known as Moonwatch has already become a legend and occupies a very special place in the history of space research. The racer Speedmaster turned into the NASA space travel watch. The Omega Speedmaster has participated in every manned NASA mission since March 1965. Thanks to its precision and reliability, this manual wind chronograph showed the crew of the damaged Apollo 13 capsule the way back to Earth. For this first-rate contribution, OMEGA received the "Snoppy Award", the highest award granted by the NASA astronauts. In the meantime, there are countless versions of the chronograph. Omega watches were present at 118 space missions and 6 moon landings. They have accompanied a total of 9 spaceflights.

Until 2007 Omega processed ETA calibers for the own products. Meanwhile, they use own calibers whose share is constantly growing.

The classically elegant collection De Ville for ladies and gentlemen contains the latest caliber technology with antimagnetic components. The Omega De Ville Central Tourbillon embodies the perfection of high watchmaking. The world's only watch with central tourbillon was handmade by a selected circle of watchmakers in the „Cellule Haut de Gamme“ of Omega in Biel. The special feature was that the tourbillon cage rotates around its own axis once a minute, balancing the effects of gravity on the precision of the watch.

Omega is the world's only manufacturer to produce watches with a central tourbillon.

Tourbillons are manufactured by Omega since 1947, the model `Central Tourbillon`, however, is the testament to the know-how and high-end craftsmanship of the watchmaking industry. Since timepieces with Tourbillon are still mechanical masterpieces of the art of watchmaking and still are made by hand, even a highly qualified watchmaker can manufacture only a few of these copies every year. The innovative De Ville Central Tourbillon Co-axial escapement chronometer is so precise that it has received the official COSC certificate (Contrôle Officiel Suisse des Chronomètres).

In the film "GoldenEye", James Bond wore an Omega Seamaster Quartz Professional 300M on the wrist. It made the Omega brand again interesting for a younger target group. Daniel Craig carried the same model 20 years later.

In addition to Cindy Crawford and Michael Schumacher, Hollywood star Nicole Kidman is the brand ambassador of the luxury watch brand Omega. In 2009, she presented the Ladymatic ladies watch line in Beijing, which was launched in 1955 for the first time. It is a specially developed ladies' watch series with automatic movement and co-axial escapement, a feature only shown by Omega watches. Thanks to clever marketing and unique technologies, Omega has managed to reach the top five in the Swiss luxury watch segment in recent years.

For the water sports Omega created its own diving watch line - Seamaster. The famous marine explorer Jacques Costeau contributed to the development of the Seamaster Plongeur Professional, better known as the "PloProf" (for "Plongeur professionel"). In 1971 the timepiece came onto the market. Water resistance was 600 meters.