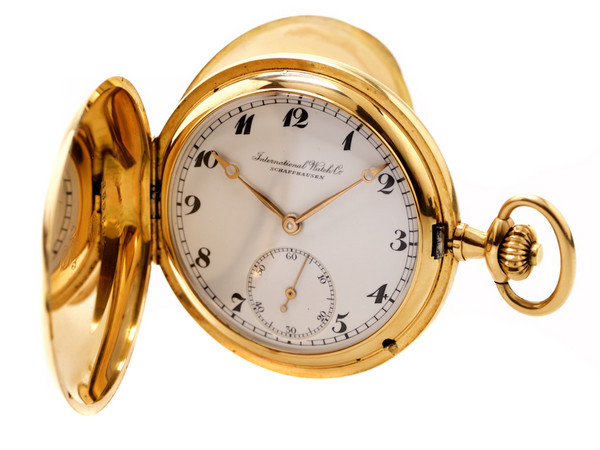 The successful history of IWC began in 1868, when the American engineer Florentine Aristo Jones settled in Schaffhausen, Switzerland.

His business partner Johann Heinrich Moser had invented a system with which they could use the hydropower of the Rhine for industrial purposes and start the mechanized watch production. One year later, the Schaffhauser manufactory was able to produce 10,000 watches for the American market. The increase in import duties to the US forced IWC to look for other sales markets. IWC entered the jeweller'sand watch business, especially in Germany.

IWC's core products were wristwatches but also more and more precise pilot watches, which could be worn over the flyer jackets.

At the beginning of the 20th century flying was an exciting adventure. Charles Lindbergh's flight with his "Spirit of St. Louis" across the Atlantic in 1927 was one of the major media events and attracted worldwide attention. Problematic for the pilots of this time was the fact that the electronic instruments did not provide reliable calculations. At first pocket watches were used as a navigational aid, but they did not stand up to the extreme operations in the airplanes, the reading during the flight was almost impossible. In order to facilitate time measurement in the cockpit, IWC developed the "special watch for airmen".

The "special watch for aviators" was equipped with a black dial, well-readable Arabic numerals, magnetic field protection, luminous hands and robust rotating bezel. This timepiece established a watch dynasty in 1936, which was continued by the Grand Aviator and the Mark X and the Mark XI. The Mark X equipped with the calibre 83, was a wristwatch for the military service use. In the period 1939-1947 about 6000 of these special watches, which carried the letter M = military, on the case bottom, were manufactured. The models made for the British army had the so-called "King's arrow" and the three letters W.W.W (= Watch.Wrist.Waterproof) under the company logo on the dial.

The legendary Mark XI became the official timepiece of all British Royal Air Force pilots in the years after the Second World War and remained in use for more than 30 years. In addition to RAF pilots, the captains of renowned civilian airlines and the officers of most of the Air Force in the Commonwealth, including the Australian, New Zealand and South African Air Force, trusted the military IWC watch with radium dial.

To date, these vintage pilot watches are very popular with collectors. In 2002 the Big Pilot was launched. With a diameter of 46 millimeters, it is much smaller than the original pilot watch from the 30s, but it is still popular among the lovers of large watches. The flagship of IWC is equipped with the largest automatic movement of the Schaffhauser manufactory, the calibre 51111. It is considered a homage to the navigation clock for the German Luftwaffe from the year 1940. 10 years later IWC dedicated a limited edition of the pilot watch to the writer and pilot Antoine de Saint Exupéry.

In 2007, the TOP GUN became part of the IWC family. The name "Top Gun" was inspired by the United States Navy Fighter Weapons School, from Fallon / Nevada.

The Portuguese is not only one of IWC Schaffhausen's oldest watches, but probably the most prestigious - the showpiece of the IWC watch collection. It happened in 1930 when two Portuguese merchants commissioned wristwatches at the International Watch Co. with the accuracy of marine chronometers. The company's watchmakers from Schaffhausen used a pocket watch calibre and built it in steel casings. This was the birth of the Portuguese, one of the most popular watches in the high-end watch segment. The Portuguese collection has grown steadily over the years.

The Portuguese Perpetual Calendar, which displays the date, weekday, month, a four-digit year and the complete moon phase including the remaining days until the next full moon, is a popular collector's watch.

IWC was able to prove its innovative power through the "Ingénieur" from 1954. A soft iron protects the work from magnetic radiation, which normally affects the accuracy. In 1970 the "Ingénieur" got a new look from the legendary designer Gerald Genta.

In the 1970s, the International Watch Company, together with Jaeger-LeCoultre, was sold to the German VDO / Mannesmann Group, which then again went to the Richemont Group in 2000.

IWC responded in 1967 to the increasing popularity of diving with the first Aquatimer. The original Aquatimer was still very similar to other models, but withstanding a pressure of 20 bar, corresponding to a diving depth of 200 meters, and an internal rotating bezel, which allows reading the dive time.

The Aquatimer with its light titanium case is clearly a diving sport watch and impresses also on extreme underwater applications. Thanks to an ingenious mechanism that allows a tool-free change of the bracelet, a watch with a rubber bracelet can be changed into an elegant version with a stainless steel bracelet.

In the spring of 1980, Jürgen King, then Technical Director of IWC, was commissioned to develop a combat watch for the German Federal Navy - a special wristwatch for mine divers. A 30-page booklet contained the requirements for the new diving watch: accuracy, impact resistance, temperature behavior, density and amagnetism. "This was a real problem," says Jürgen King. 'No company had ever built an amagnetic watch. We have already produced watches for military purposes fifty years before, but we had to start the basic research on this order. In collaboration with the legendary designer Ferdinand Alexander Porsche the product was created - the so-called "Ocean Bund" in three military versions: a combat float watch, a weapon watch and the mine diver’s watch. Two civilian versions of the "IWC Porsche Design Ocean" - the "Ocean 2000" and the "Ocean 500" were produced as side products.

In 1985 IWC launched the first chronograph from the Da Vinci series. The lasting sales success proves it - the crown of the Da Vinci collection is the IW 3764 chronograph, equipped with an automatic caliber 89360.

In 1993, IWC celebrated its 125th anniversary with the Il Destriero Scafusia (in German: the Schaffhausener Schlachtross). This watch was at this time the world's most complicated mechanical watch. The timepiece combines almost all the complicated finesses of watchmaking: a flying minute tourbillon, an IWP-constructed rattrapante mechanism, minute repetition, perpetual calendar, moon phase and numerous other complications make from the Destiero Scafusia a rare miracle of mechanics consisting of 750 tiny parts.

Albert Pellaton, the technical director of the Schaffhauser manufactory during 1944-1966, was responsible for many technical developments at IWC, including the development of the efficient automatic winding mechanism. In 1946, his winding mechanism was registered for patent approval.1950the innovative pawl-winding system replaces the traditional reciprocal gearing. In 1964 the legendary rotor machine was built. The system, which is less susceptible, is reproduced worldwide, and even manufactories such as Patek Philippe took over this sophisticated technology. The automatic winding mechanism is also used in the caliber 8541 of the first Aquatimer.

In 2008 IWC entered into a partnership with the German Soccer Association (DFB). The "Big Pilot's Edition DFB" became the official watch of the German national football team.