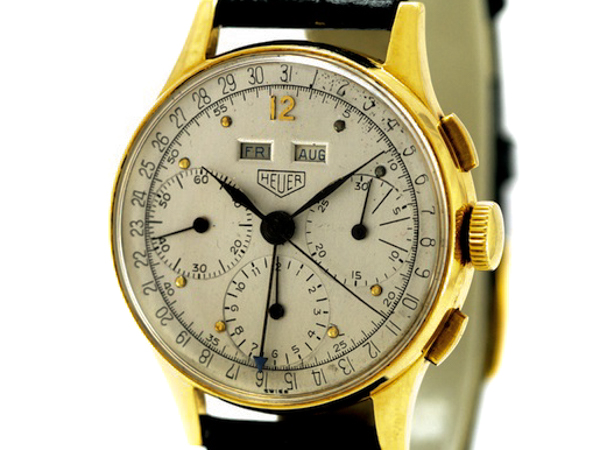 In 1860, Edouard Heuer opened his first watch workshop in St. Imier, a small town in the Swiss Jura in western Switzerland. Since the founding, Edouard Heuer`s innovations have been the characteristic element of the manufactory. Heuer is the inventor of the famous "swinging gear" for mechanical stopwatches, patented in 1887. This technical innovation is a cornerstone for accurate time measurement being still used even today by leading manufacturers of mechanical chronographs. It´s part of the Caliber 1887 for example, which is completely developed and manufactured by Heuer.

The almost 160-year-old company history proves the inexhaustible pioneering spirit of the manufactory. In 1911 Heuer presented the first on-board chronograph for vehicles, called "Time of Trip". In 1916, the first hundredth of a second chronograph was invented. In 1933, the first watches for racing cars, 1950 the first dial with world time, in 1962, Heuer presented the legendary stopwatch Autavia, a classic among the Heuer watches. In 1964 Heuer joined Leonidas. In cooperation with Breitling and Dubois-Depraz, Heuer succeeded in launching the automatic chronograph movement with micro-rotor, Caliber 11. In the same year, the Heuer Monaco was introduced. In 1976 the Heuer Monza was launched on the occasion of Niki Lauda's 1 World Championship title. In 1983, Tag Heuer presented the world's first quartz chronograph with analog display. 2 years later the company was taken over by the TAG Group (Techniques d'Avant Garde) and changes its name to TAG Heuer. In 2004, the first mechanical movement with belt drive, linear flywheel mass and ceramic bearings was presented and only a year later the first mechanical wrist chronograph with hundredths of a second measurement accuracy. In 2008, TAG Heuer won the prestigious Grand Prix d'Horlogerie de Genève in the category "Best Sports Watch" with the Grand CARRERA Caliber 36 RS Chronograph. Meanwhile, TAG Heuer devotes more to his legacy and revives numerous classics.

Heuer designed several revolutionary timepieces and knew how to put them on the scene. 1964 was the birth of the CARRERA series. The Heuer Carrera line contains sports watches, which are mainly inspired by motor sport. Jack Heuer himself, an enthusiastic follower of the motor sport, designed the CARRERA. Carrera's distinctive trademark is the outstanding readability, waterproofness and high shock resistance.

Jack Heuer, the great-grandson of the company's founder, named the watch after the famous road race from the 1950s, the "CARRERA PANAMERICANA" in Mexico. The CARRERA - as the first chronograph with a functional dial, was a tribute to Juan Manuel Fangio, the emblematic Heuer ambassador. The name of the timepiece refers to the Spanish word "Carrera" which means "race of the highest rank".

The Carrera became the best-known sports chronograph in watch history. The sports watches from the Carrera collection are regarded as outstanding examples of watchmaking. Numerous new editions and model variations testify the success of this watch.

On March 3, 1969, Jack W. Heuer, the great-grandson of the company's founder, presented the famous caliber "Chronomatic". The Chronomatic Caliber 11 was the first chronograph movement to have a self-winding mechanism with a micro-motor. The work was created by Heuer-Leonidas (today TAG Heuer), Breitling, Buren and Dubois-Dépraz under the name of "Project 99", creating a true revolution in the watch world.

In the same year Heuer launched MONACO, the world's first square, waterproof, automatic chronograph equipped with the "Caliber 11 - Chronomatic". The daring design of the watch with its fire-red chronograph hands, the metal blue dial, domed sapphire glass and square housing meant a complete break with conventional aesthetics in the watch design. The name MONACO should help to address an elegant, demanding target group. The avant-garde design was well received. For a long time the Heuer Monaco was the favorite model of racing drivers and film stars. To this day, it is regarded as a permanent symbol of fame, status and style and enjoys unbelievable popularity.

Steve McQueen wore the Heuer MONACO in the film classics "Le Mans". In 1971 Le Mans entered the cinemas and made the brand HEUER world-famous. The most prestigious square watch in the world is even today connected with the actor. The "McQueen MONACO" is one of the most valuable pieces on the international watch markets. In July 2012, the Steve McQueen 'Monaco' (model 1133B) was sold for spectacular 650,000 US $.

In the meantime, there are several models, including - MONACO SIXTY NINE, MONACO V4, MONACO GRANDE DATE, MONACO CLASSIC CHRONOGRAPH on the market.

In 2009, TAG Heuer presented the special edition of the first Monaco, limited to 1,000 pieces. The classic features of the model include the "Caliber 11" movement, push buttons at 2 and 4 o'clock, the counters at 9 o'clock and 3 o'clock, the crown at 9 o'clock, the date window at 6 o'clock and the diamond-covered horizontal hour indices.

In the long years of their existence, many prominent figures came into contact with the TAG Heuer watches. The connection to the motor sport also offered many exciting events. The "Time For Action" slogan is from the 70s and clearly shows the close connection between "Action" and the Heuer watches.

The very special relationship between TAG Heuer and international racing sport was and still is, one of the hallmarks of the company. From 1992 to 2003 the label produced the time-measuring devices for the Formula 1. Two of the most successful teams, namely "Ferrari" and "McLaren-Mercedes" still use the contemporary instruments of TAG Heuer. TAG Heuer has also been an official timekeeper for the famous IndyCar racing series from America, for nine years now.

Heuer was the official sponsor of the Olympic Winter and Summer Games in 1980. Since 2003 the company has been taking over the official time measurements for the Alpine World Ski Championships in St. Moritz. For this occasion, the designers of the house created a chronograph series, limited to 750 pieces. In 2016, the watch brand TAG Heuer entered a partnership with the English Premier League.

The TAG Heuer brand has created a clear identity and a high degree of recognition through its consistent commitment to timekeeping in top-class sports.

Jack Heuer, the great-grandson of the company's founder, quickly understood that advertising media is very important and gave famous people from film and sports HEUER watches. The only condition for his gift was a photo of the film star with the watch on the wrist in return. After a short time he had pictures of Jack Lemmon, Burt Reynolds and Charlton Heston.

The company TAG Heuer is ranked fourth in the global ranking of watchmakers in terms of size and turnover. TAG Heuer has been part of the luxury goods manufacturer Moët Hennessy - Louis Vuitton (LVMH) Group since 1999. Jack Heuer retired in 2013 and is now honorary president of the brand TAG Heuer. The founder's great-grandson is one of the last great men of the Swiss watch world.