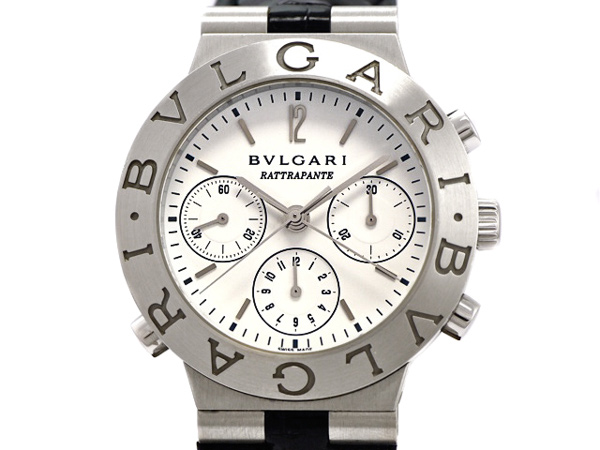 Bulgari was founded in Rome in 1884 and only celebrated the 125th anniversary of an independent family business in 2009. In addition to Hublot and TAG Heuer, the Italian prestige brand Bulgari has been part of the French luxury goods group LVMH since 2011.
The Bvlgari Bvlgari collection represents the debut of the Italian company in the wristwatches segment. The legendary designer Gérald Genta set the manufacturer's brand name on the bezel of the watch, creating an unmistakable, emblematic trademark in the Greco-Roman style of classicism, which represents the legacy of Rome as the origin of Bulgari.

From the beginning, the traditional brand Ebel has concentrated on the fashion phenomenon - watch. Among watchmakers, the watch brand EBEL is immediately associated with the legendary bracelet with wavy links, also known as the Wave. The unmistakable design feature combines high-quality materials with Swiss know-how and a lot of refinement. EBEL is versatile and offers a wide range of watches for ladies as well as men. From classic, elegant, timeless lines such as the Ebel collection to sporty chronographs, everything is represented. Boris Becker wore an Ebel on his wrist while winning the Wimbledon title in 1985. The popularity of the Ebel brand has grown rapidly since this event. In addition to Boris Becker, other sports enthusiasts were also passionate about the watch brand, including Michael Stich, Stefan Edberg, Gabriela Sabatini and André Agassi.

For more than 160 years, the Swiss tradition brand Eterna has been manufacturing high-quality, mechanical watches according to the rules of traditional watchmaking. The list of Eterna's future oriented innovations is long: the first alarm watch (1914), the smallest series of baguettes produced in 1930,the ball bearing centermounted rotor Eterna Matic (1948), the spherical bearing structure Eterna Spherodrive and many more. True to their own slogan "Pioneers in Watchmaking", Eterna has managed to reinvent itself and always remain true to the traditions.

Franck Muller's story is one of the most widely discussed success stories of the Swiss watch industry in recent times. From the very beginning, Franck Muller splits the minds: some call him genius, the others merely a commercial upright. The fact is that Franck Muller's watches have already set a number of records, so he can claim the title "the most complicated watch in the world" in 1992 and 1998. This watch contains a perpetual calendar with retrograde month and equations display, weekday, date, 24-hour and leap year cycle, moon phase and a thermometer.

F.P.Journe stands for Francois-Paul Journe. True to the motto of Invenit et Fecit (lat. Invention and implementation), the manufactory is completely self-governing and belongs to the most important small Swiss manufactories today.
For years, the watchmaker has received numerous awards. In 1994, for example, he received the Prix Gaïa, which is given only to important personalities of the Haute Horlogerie. The Octa Calendrier model received a special prize from the jury in 2002. The prize "Golden Pointer" won F.P.Journe even twice. Once with the model Sonnerie Souveraine and once with the model Centigraphe Souverain.

The watch brand Graham became popular and well-known with the Swordfish collection, which was presented in 2001. In every Swordfish, ticks the G1710, an ETA-based calibre. The founder of the company Graham was one of the most important watchmakers of all times, whose achievements were recognized by the Royal Society and the Watchmakers Company. The most venerable inventions were the Graham inhibition and the cylinder escapement.

The history of the Longines brand is closely linked to aviation, visible also in the hallmark of the brand the winged hourglass. In 1919, Longines became the official partner and supplier of the Fédération Aéronautique Internationale (FAI). A few years later, a chronograph made by the Swiss manufactory accompanied the American pilot, Charles Lindbergh, at the first Atlantic crossing. In cooperation with the flight pioneer, the manufactory developed high-precision navigational instruments, when aviation was still in the children's shoes. The Longines Lindbergh also called "hour angle watch", allow the pilots quickly and uncomplicated determination of the longitude. Longines chronographs with a calibre of 13ZN, which were initially given with minutes and from 1942 with hour counters, are today highly-acclaimed collector's watches and achieve amazing results at auctions. Starting from 1947 the calibre 30CH was the cost-effective alternative to the calibre 13ZN, but likewise esteemed and of course worth collecting.

The Swiss company Lemania is famous for its movements. The Lemania calibres 2310, 1873, 5100 and 1341 (to name a few) are still used today in watches of numerous well-known brands such as Omega, Heuer, Patek Philippe and Paul Picot. The Lemania calibre 2310 gained a very special place in the history. Installed in the Omega Speedmaster Professional, she accompanied Buzz Aldrin on his first steps on the moon. In the 70s, Lemania produced military watches for the Flygvapnet (the Swedish Air Force) and the South African Air Force.

The history of the luxury brand Piaget began in 1847 with Georges-Edouard Piaget. The Swiss watchmaker has been producing watch movements for other renowned watch brands for decades. Only starting from 1940 began Piaget with the production of own watches. As a result exclusive timepieces such as the Dancer, the watch with diamond bracelet or the Emperador with housing in cushion shape emerged. But also the ultra-flat models, such as those from the Altipiano collection or the watches with exuberant case from the Limelight collection, have made Piaget a worldwide fame.

The Danish, Svend Andersen is regarded as the "watchmaker of the impossible" in the watch industry. His creations such as the World Watch, Christophorus Columbus or the world's smallest calendar watch, which was even recorded in the 1989 Guinness Book of Records, quickly gained fame. Through his watch in the bottle the renowned manufacturer Patek Philippe became aware of him and recruited the watchmaker for their "Atelier de Complications". After nine years with Patek Philippe, Andersen took the step to independence and since surprises with excitingproduct innovations such as: Perpetuel 2000 in the art deco look, the Mundus series or the Hebraïka, the watch with a Jewish calendar.

Movado stands for "always on the move" in Esperanto. The watch factory established in La Chaux-de-Fonds was founded in 1881 by Achille Dietesheim. Together with six other watchmakers, they starting producing mainly pocketwatches. Known models from the house Movado is the case watch Ermeto (1926) and the museum watch (1947) with the gold or silver point at the twelve. The minimalistic dial, designed by Nathan George Horwitt, has since become the distinctive mark of Movado. Movado built in the 30s until the 50s watches in excellent quality with own calibre. There are many MOVADO collectors from the time. Especially the Chronos are to be mentioned. In the first 100 years of its existence, Movado registered 100 patents and received more than 200 international awards for outstanding quality and creativity.

The Fabrique d'Horlogerie Minerva SA is a small watch manufacturerbased in Villeret Switzerland. Minerva is famous for its own exclusive hand-winding and chronograph calibres produced for Montblanc and Officine Panerai. Since October 2006 the Fabrique d'Horlogerie Minerva SA belongs to the Swiss company Richemont. Their famous Villeret collection was created in collaboration between Minerva and Montblanc. Vintage Minerva chronographs and Rattrapantemodels are very popular collectors' watches and now earn appreciable prices.

Mario Boiocchi, the visionary founder of Société des Monters Paul Picot, deliberately does not offer watches for the mainstream, but relies on the clientele who already owns everything and is looking for something special. Paul Picot is one of the most recent watch brands of the Haute Horlogerie (1976) and devoted itself to the "Grandes Complications" from the very beginning. The watches by Paul Picot are master craftsmanship that combines traditional watchmaker´s art with modern technology.

The brand "Universal Genève" was not registered until 1937, before the two watchmakers Numa-Emile Descombes and Ulysee Georges Perret had led the company under the name "Universal Watch". The two watchmakers set very early on wristlet chronographs and thus had a huge success in Europe and America. The Compur and Compax models, later the Tri Compax, were synonymous with quality and reliability. Universal Genève attracted attention with a lot of new patents, particularly in the development of thinner automatic movements.
Universal Genève watches from 1960 are experiencing tremendous demand. E.g. the "Jochen and Nina Rindt" timepieces, named after the racing legend Jochen Rindt and his wife. Especially the "Nina Rindt" Compax chronograph with Valjoux 72 calibre from the 60s is very popular with collectors.

The famous Saxon town, Glashütte is often in the headlines. This is due to the fact that NOMOS manufactures timepieces. In recent years alone, NOMOS has received more than 100 awards for the quality, price performance and design of its watches. According to the New York Times, NOMOS is one of the best watchmakers. "NOMOS is among the best luxury watches out there". Their secret - extraordinary watches in purist design in the tradition of Bauhaus and the German Werkbund with their own calibre from Saxony.

Since 1881, the Japanese watchmaker Seiko stands for high quality, outstanding design and innovation. In addition to the production of quartz, mechanical and solar watches, Seiko dwells on two technologies: Kinetic and Spring Drive. In 1969, Seiko, the first quartz wristwatch in the world, was presented under the name of Seiko Astron. In 1964, Seiko was the official timekeeper of the Tokyo Olympics. Today, the Japanese manufactory is the official timekeeper for athletics (IAAF) and sailing sport (49er and 49er FX Association). Seiko's affordable second brands are Pulsar (since 1977) and Lorus.

The flight instructor and pilot Helmut Sinn founded "Helmut Sinn special watches" in 1961 and began to produce navigation watches and pilot´s chronographs. In 1994 the graduate engineer Lothar Schmidt took over the company, expanded the model range and developed new watch models with new technological solutions for special applications such as the Special Forces of the Navy (KSM).