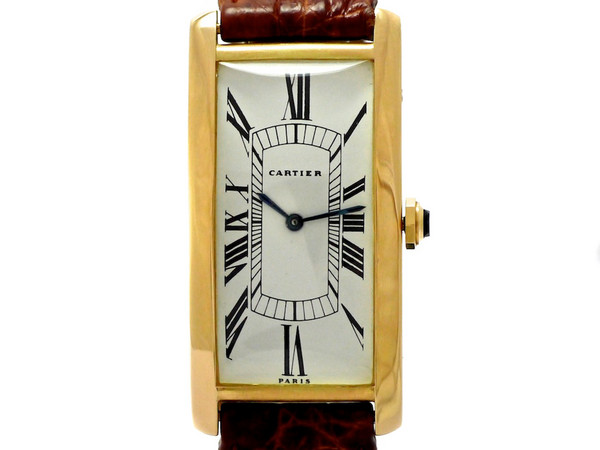 Cartier, the world-renowned company, goes back to a small jewellery shop at the 29 rue Montorgueil in Paris, which Louis-Francois Cartier took over in 1847 from his teacher Adolphe Picard.

Initially, jewellry was made in pure craftsmanship. The company founder, with his extraordinary products, was able to meet the noble clientele of Princess Mathilde, the niece of Napoleon I and the cousin of Emperor Napoleon III. , so that nothing prevented the expansion of the product range with exclusive pocket watches.

It was Alfred Cartier, the son of the jeweler, who also convinced his father to develop the first wristwatches and to include them in the product range of Maison Cartier.In 1898 Alfred Cartier's son Louis also joined the family business. In addition to pocket watches and wrist watches, he also made pendulum clocks at Cartier.

The beginning of the twentieth century celebrates the beginning of a glorious history for the timepieces from the house of Cartier. During this time, the famous classics Santos (1906), Tank (1917) and Pasha (1932) emerged.

On a list of world’s best known men´s watches, the Santos by Cartier has to be present. The Santos was made for the Brazilian flight pioneer, Alberto Santos Dumont, who was also the namegiver. The background story for the clock development was basically banal. Santos Dumont, noted that the reading of a pocket watch that was common at the time, was difficult during the flight, and so he ordered an appropriate watch at his friend Louis-François Cartier. In 1906 Santos Dumont succeeded, the first public motor flight in the world - with the Cartier "Santos" on the wrist.

The first Santos was made out of gold and provided with a brown leather bracelet. Characteristic of the Santos is the angular housing, the seamless transition from case to the bracelet as well as in many versions the conspicuous screws on bezel and steel bracelet.

Three different versions of the coveted men's watch exist now. The choice is between Santos de Cartie Galbée, Santos 100 and Santos-Dumont. The latter is the most exclusive piece of the collection and, with the alligator leather bracelet and the golden case, is the strongest reminder of the aviation watch, which was sold in 1911.

"A Tank, Is A Tank, Is A Tank" that was the Cartier slogan at the launch of the Tank Anglaise. The statement referred to the most requested model of all tanks: The Tank Louis Cartier from the year 1922, also known as LC tank for collectors.

The Tank Louis Cartier named after the English word "tanks" for tanks of the size of a stamp (exact dimension - 33.5 x 25.5mm) was the second after the tank standard 1919. The exclusive model of precious metals with a pearl crown and a sapphire cabochon, was also worn by Louis Cartier himself and is considered a reference model among the tank timepieces. The model continues to be popular with designers and artists, including Andy Warhol, Alain Delon, Clarke Gable, Catherine Deneuve and Duke Ellington.

The Tank Américaine is a classic of the Cartier watches. The history of the timepiece is closely linked to the history of the First World War. In 1917, Maison Cartier donated to the courageous commander-in-chief of the American troops, General Pershing, a prototype of his new timepiece, grateful for the liberation of France. Meanwhile the Tank Américaine is available in a variety of designs and three different sizes. Whether ornamented in white or red gold with diamonds or classic with leather strap and yellow gold case, all have the simple dial with Roman numerals and blue, sword-shaped pointers, in common. The timepieces are optionally equipped with quartz or a mechanical movement with automatic winding.

With the Tank Française and the Tank Anglaise the Cartier Tank collection is expanded.

The Pasha by Cartier is one of the most famous classics of the brand. According to the legend, the order for the timepiece came from the powerful Pasha and military chief of Marrakech, El Haj T'hami el Mezouari el Glaoui - who needed a waterproof watch.

The prime Pasha model had a kind of protective metal grating above the dial. In 1985, it came into the market in a new design, according to the specifications of the designer Gérald Genta. The grid has disappeared, the four large arabic numerals have remained at twelve, three, six, and nine o'clock, just like the concise winding crown at the three o'clock position.

The task of Pierre and Jacques Cartier was to build up the reputation of the manufacture of luxury jewelry and watches, abroad. They founded the first branch office in London with great success. Within two years Cartier became the court supplier of most of the European kingdoms and was given the nickname of King Edward VII "the jeweler of kings and the king of jewellers."

With the death of the Cartier brothers, the business was getting worse and worse. The company could no longer be held in family ownership and the empire was divided among several investors. It was only in the year 1974 when "Cartier Monde" was created under the direction of Robert Hocq and Joseph Kanoui that the brand focused again on the fundamental values and strengths.

Since 1993, Cartier has been part of the Richemont Group, along with some of the world's most prestigious luxury brands. The Swiss luxury goods group also bought the Roger Dubuis factory in 2007. Shortly afterwards, Cartier has placed 10 watchmakers in the studios of Dubuis. The result of the collaboration was Cartier's Flying Tourbillon.

Roger Dubuis is currently the only company whose complete production can bear the "Poinçon de Genève" seal.